Workers at the port of Felixstowe announce a new strike action

The previous Unite Union negotiations have failed, a new eight-day strike action will be started at 07:00 on Tuesday 27 September and ending at 06:59 on Wednesday 5 October. 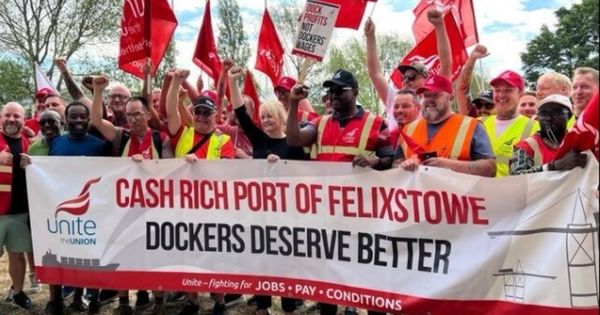 Strike at the port of Felixstowe (Image: Unite/Twitter)

Workers at the port of Felixstowe will continue to strike after the failure of negotiations between the British trade union Unite and CK Hutchison-owned Felixstowe Dock and Railway Company - the port owner.

Unite said last week the management of Felixstowe Dock and Railway Company had concluded salary negotiations after refusing to improve its pay offer and instead announced that it was imposing a pay deal of 7% on the workforce.

"The imposed pay deal is in reality a sizeable pay cut with the current real inflation rate (RPI) standing at 12.3%," the union pointed out.

In response, Unite, which represents 1,900 workers at the UK's major container port, surveyed its members, with 82% of those who decided to decline a pay offer accounted for 78% of riders voting.

The previous strike lasted from October 21 to 29.

"The latest strike action is entirely of Felixstowe’s own making.  Rather than seeking to negotiate a deal to resolve the dispute, the company instead tried to impose a pay deal," said Bobby Morton.

"Further strike action will inevitably lead to delays and disruption to the UK’s supply chain but this is entirely of the company’s own making." he added.