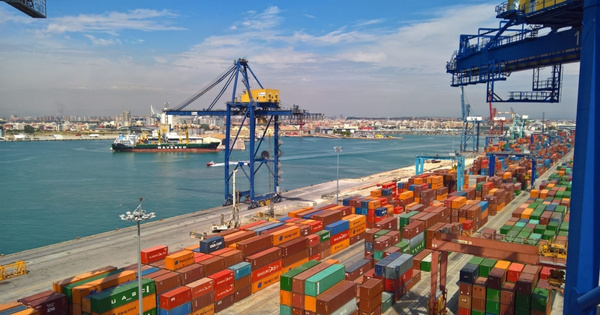 The crisis in the world's major economies and the geopolitical situation is having an effect on traffic at the port of Valencia, Spain's premier logistics infrastructure serving import and export companies. export.

Specifically, in the first 10 months of the year, this situation was reflected in the decrease in the number of containers entering and leaving Valencia, especially transshipment containers. On the other hand, there has been a significant increase in liquid bulk, particularly for natural gas and solid bulk.

Similar cases are being observed in the other three leading European ports. As of September, container throughput at the port of Antwerp fell 5%, in Rotterdam down 4.4% and in Hamburg down 2.4%.

For containers, January through October totaled 4,336,957 TEUs, down 7.7% year-on-year. Following trends during these months, the biggest drop occurred for transshipment containers (those that are shipped between major ports and then delivered to final destination ports). For transshipment laden containers, during this period, there was a 14% decrease, a decrease of more than 292,434 TEUs that were delivered to other Mediterranean ports. The number of full containers (export) was also affected, down 7.1%. Container unloading (imported) continued to record positive numbers with a growth of 6.2%. Empty containers decreased by 4.7% and transshipment containers decreased by 20.80% (down 71,943 containers).

In October alone, the Bulletin data showed that total cargo traffic decreased by 15.4% and container volume by 17.8%, recording negative numbers for loading and unloading activities. On a yearly basis (November 2021 to October 2022), 81.64 million tons of cargo (down 4.6%) and 5,241,641 TEUs (down 7.4%) were handled. Again, it should be noted that transshipment containers, both full and empty, decreased by 435,392 containers during this period.

Source: Phaata.com (According to Valencia Port)