Container volume to the US dropped sharply by 9.4% in October

The volume of cargo containers imported into the US dropped sharply by 9.4% in October 2022, calculated across the 10 largest US container ports. 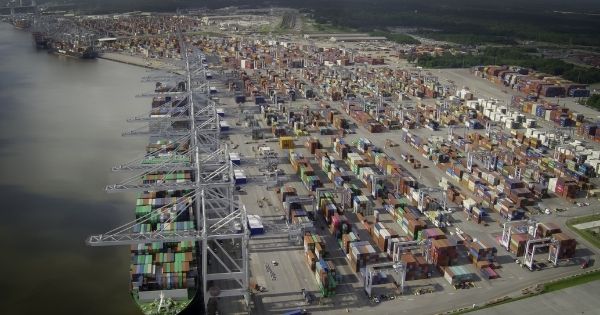 Port of Savannah in the US (Photo: Georgia Ports Authority)

Imported container volumes reached 1.9 million TEU, the lowest since February 2021, according to analysis from the McCown Report. There are striking differences between the two coasts of America. Specifically, East Coast imports rose 9.5% from the 28-month average, while West Coast ports fell 22.7%, creating an overall deficit of 6.8% above average 28 months.

According to analysis from the McCown Report, West Coast ports led the decline with a 23.3% drop in October year-over-year. This is the largest drop seen in more than 7 years.

McCown said the figure represents a compound annual growth rate of 2.4% over the past three years, suggesting a return to more normal growth.

The report forecasts output will continue to decline sharply during the year for November and December as the market recovers from the effects of the pandemic.

Output continues to shift eastward despite significant reductions in congestion at the Port of Los Angeles/Long Beach. In October, an average of 6.1 ships were waiting to dock compared to 103.5 at the beginning of this year.

Some of the congestion has shifted to the East Coast, with vessels queuing 32 and 17 at the Port of Savannah and Port of Houston, respectively. But according to McCown's estimates, the number of ships waiting to dock is 70 nationwide, down from 99 last month.

McCown again highlighted what he called the “perilous impact of container rates on inflation,” with his estimate that the U.S. economy absorbed about $113.2 billion in annual inflation based on on the difference in container freight rates between the fourth quarter of 2019 and the third quarter of 2022.