Port of Felixstowe strike could increase demand for air freight 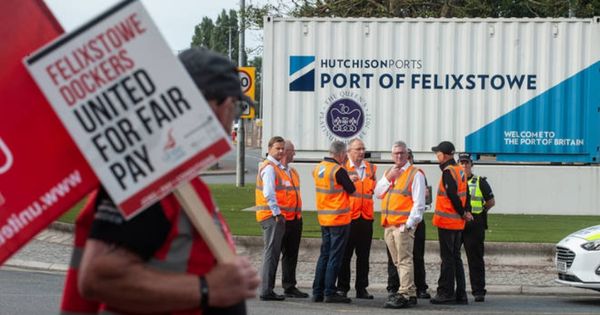 Strike at the port of Felixstowe (Image: Getty Images)

Workers at the Port of Felixstowe, part of Unite union, will go on strike from Sunday, August 21 to Monday, August 29. The move is likely to exacerbate existing shipping supply chain bottlenecks in this country.

“In the past 29 months we have seen huge disruptions in global supply chains, much of which was caused by the Covid-19 pandemic which saw ports around the world impacted by lockdowns and restrictions in an effort to control the spread of the virus."

“Recent events with lockdowns in China created not just a disruption to the supply chain, but a far wider issue as manufacturing ground to a halt, meaning volumes of cargo for movement by air or sea were not available. Fortunately, this issue is all but over."

“A disruption at the UK port of Felixstowe, the UK’s busiest container port with many rail links to locations across the United Kingdom, would likely push volumes once again from surface to air movements, or cause additional disruption to ocean freight schedules as operators try to accommodate volumes into other UK ports. We are already seeing requests for volumes to the UK that would normally be moving by ocean for the month of September. We have good contingencies in place for these kind of events, so we are not overly concerned".

Bob Matharoo, Cargo First's head of cargo at Bournemouth Airport, also told Air Cargo News: “These are challenging times for freight forwarders trying to meet UK demand for their goods. The expected delays at Felixstowe and the ongoing delays at Dover are leading shippers who would normally use sea and land routes to seek alternatives. We may see some switch to ports in Europe and wait it out but, for time-critical goods especially, air freight is the logical choice."

“At Bournemouth Airport, our dedicated freight handling business, Cargo First, is taking more calls as shippers explore their options and recognise that we can often get goods to market faster, cheaper and more efficiently than via hubs like Heathrow."

In an operational update on its website, the Hutchison Ports-owned port said its offer of a 7% salary increase and a one-time payment of $500 was rejected by the branch of Unite.

The Unite branch and the Police Federation of Felixstowe Dock and Railway Company have agreed to make a similar offer to their members.

The branch added that the union had rejected an offer to meet again.

Forwarders CH Robinson and DHL Global Forwarding recently said the pandemic-induced modal shift from sea to air began to reverse in the second quarter due to falling container shipping costs and congestion at ports port reduced.

Source: Phaata.com (According to AirCargoNews)