Spot rates on trans-Pacific shipping routes have plummeted more than 50% from its September 2021 peak, according to Shifl. According to the Shifl platform's SHIFEX freight rate index, spot rates for major trans-Pacific trade lanes fell sharply in the third quarter, down more than 50% from their September 2021 peak, falling at an unprecedented rate seen since the beginning of last year.

The reason for the sharp drop in freight rates in the first half of the year was the sharp drop in demand related to the tightening of monetary policy in the world, the shift in consumer spending from goods to services, the sale of inventories, etc. Retail sales increased in the US and Europe combined with a severe decline in manufacturing in China.

At the same time, international shipping companies are coming under increasing attack for their role in fueling inflation, with the US Congress passing a bipartisan bill in June aimed at preventing future freight rate hikes and adding extra capacity for exporters.

The US Federal Reserve raised its lending rate by 75 basis points in July to combat rising inflation, to 9.1% in the same month, its highest level in 40 years.

“Inflation, coupled with softening demand for goods as consumers allocate more money to eating out and holidays, has prompted US lawmakers to step up their efforts to curb runaway prices in the world’s biggest economy through various pieces of legislation such as the Ocean Shipping Reform Act 2022,” said Shabsie Levy, CEO and Founder of Shifl. 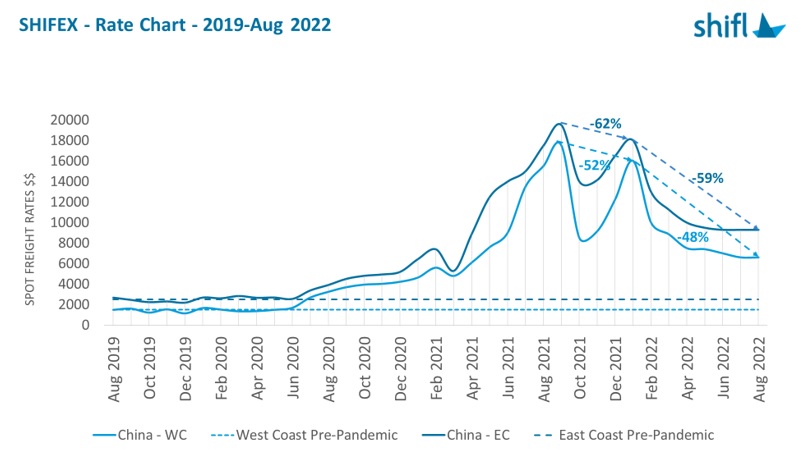 While these rates are still a long way off from pre-pandemic levels of $1,350/FEU and $2,850/FEU in March 2020 respectively on the US West and East Coast routes, the reductions are still help shippers reduce costs.

Meanwhile, Shifl reported that retail inventories continued to rise to record levels, growing 2% in May to $705 billion, increasing cargo reserves at ports and inland.

“Congestion continues to play a major role in keeping spot rates higher than pre-pandemic levels, and with shelves and warehouses fully stocked, we’ll probably see more containers sitting on the dock or at railway yards for longer periods as we move into the second half of the year,” Levy noted.

According to data tracked by Shifl, container dwell times have steadily increased over the past three months.

It is important to note that while it took an average of 4 days for a container to leave the port in May 2022, this has increased to 5 in June and 6 in July.

Container dwell times increase, once again raising projections for a container dwell fee – a measure introduced at the ports of Los Angeles and Long Beach in October that allows allows the ports to charge ocean carriers US$100 for each import container that stays nine days or more in the terminal. However, the implementation of the fee has been delayed by both ports for months so far.

It should be noted that there was an overall decline in transit times on major US East and West Coast routes in July, maintaining a downward trend that began in May.

Transit times from China to US West Coast ports decreased from 34 days in May to 32 days in July. The improvement was most noticeable for ships going to the US East Coast, with transit times from 56 days to 46 days, an 18% decrease from May.

“The off-peak season has enabled carriers to reduce some of the issues they were having with service reliability, but the transpacific trade lane and the all-water route to the US east coast are still way above their respective historical averages of 16 and 27 days," Levy commented.