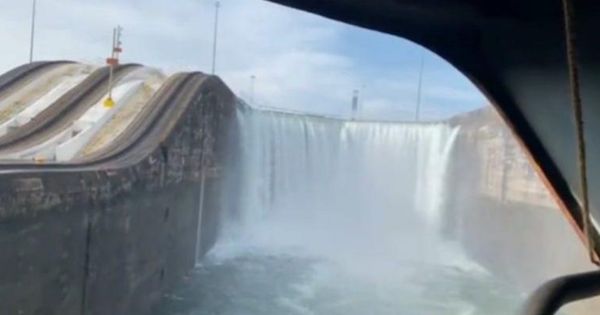 Water in the Panama Canal overflowed on the western lane of Gatun Locks (Image: ACP)

ACP has initiated an investigation to determine the cause of the westbound lane overflow and the temporary closure of the lane.

Such incidents are very rare. Similar events have occurred in the past, such as the 1972 incident in Gatun, which caused both lanes to be completely closed for about eight hours.

Additionally, in 2016 a spill was reported through Miraflores lock gates, which was immediately resolved.

The Panama Canal uses specialized equipment to effectively control such risks in a short time, ensuring efficient navigation and safe passage of ships through the waterway. Operation on the eastbound lane will continue throughout.

The canal uses a system of locks that functions as a water elevators, allowing ships to rise from sea level (Pacific or Atlantic Ocean) to Gatun Lake (26 meters above sea level); so ships can move through the channel.