Port of Savannah sets all-time trade record with a throughput of nearly 520,000 TEUs in May

The Port of Savannah set a new record with an all-time high container throughput of 519,390 TEU in May, breaking the previous record of 504,350 TEU set in October 2021. 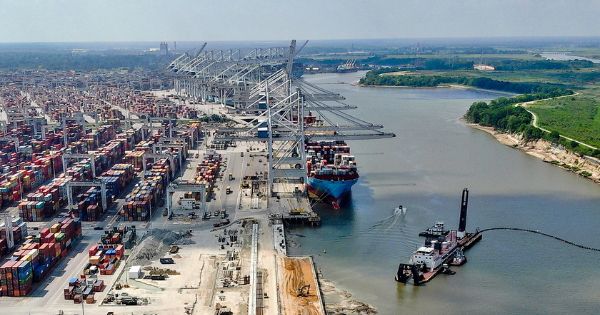 The Georgia Port Authority (GPA) has announced that an all-time high of 519,390 TEUs of containers moved through the Port of Savannah in May, breaking the previous record of 504,350 TEUs set in October 2021.

“Despite global supply chain challenges, the Port of Savannah continues to be an economic driver, providing reliable, world-class service for port customers across our state and nation,” said Georgia Governor Brian Kemp.

GPA CEO Griff Lynch noted that the Garden City Terminal is tapping more business in the current trade flow than it did during the previous spike, last fall. Additional trade was driven in part by ships diverting to Savannah from other East and West Coast ports.

“The infrastructure improvements and pop-up yards approved by the GPA Board have enabled our operations to maintain the flow of cargo across our terminal, despite unprecedented container volumes passing through the port,” commented Lynch.

Since April, GPA has added 900,000 TEUs of annual capacity to the Garden City terminal, and will add another 300,000 TEU capacity expansion scheduled to be operational in July for a total of more than 7 million TEUs of container handling space.

In addition, Phase I of the Garden City Terminal West expansion added a 25-acre container yard adjacent to the harbour. Phase II, which will add 1 million TEUs of annual capacity, which will begin coming online in 2023.